Fran has been singled out for her talented portrail in this production. 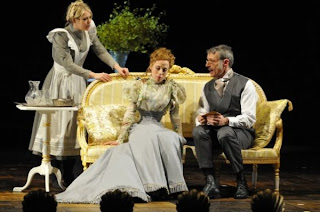 Last night at the Chatelet theater is playing the French premiere of the classic musical comedy in the USA: A Little Night Music by Stephen Sondheim. Virtually unknown in France, this piece, created from the Ingmar Bergman film, Smiles of a Summer Night, is one of the masterpieces of the genre across the Atlantic.

The story is somewhat complex, intersecting paths and amorous desires of 6 characters. Fredrik Egerman and Anne are married but have a significant age difference, Fredrik having a son, Henrik, age of his wife. Fredrik was once the lover of a stage actress, Desiree Armfeldt, which is now the mistress of an officer of dragoons, Carl-Magnus Malcolm, himself married to Charlotte.

What you want, simplicity is the enemy of banter, too much light often affects the parallel love affairs or cross! Around this small circle revolves 4 other characters: Petra (the right of Anne and Fredrik), Frid, butler's daughter, Desiree, Fredrika (!) And finally the mother of Desiree, an old lady who was at the believe, a life full of joy, adventure and lovers prestigious and wealthy who have inherited both the physical means to an honorable life, comfortable and rich, tender and sometimes burning memories. Memories that will used to reveal the games of love and sex to her little girl, taking at the role of guiding part in explaining a beautiful Scandinavian summer night smiles three times: once for the youth, once for fools once and for old age.

To be brief, say that none of our 6 main characters is happy in her love life and sex and all are in search of the Other, the one with which the harmony and pleasure are finally meeting you. Throughout the musical, couples will make or break, tear, reconciliation, and finally pair. Provided that with such a plot, the work is rather risky, for the creator, director and performers. A Little Night Music is a fragile flower to be beautiful, must avoid the pitfalls of vulgarity or excessive prudishness. Stephen Sondheim, who was the lyricist L. Bernstein West Side Story, created the music and dialogues full of finesse, depth and richness, a work of rare and delicate balance, and yet with great strength.

The phenomenal success he has met since its inception in 1973 has welcomed this performance. The staging of this production at the Chatelet is no less happy, Lee Blakeley was able to leverage the work of fine art director Rae Smith, light and rich scholarly Jenny Cane and elegant costumes by Jo van Schuppen. Andrew George sign the choreography that punctuate the piece dances outdated evoking the golden age. All this together creates a happy, served by the brilliant performance of the Philharmonic Orchestra of Radio France conducted by Jonathan Stockhammer.

Remained in place in this beautiful setting, the acting. And the poster is attractive, see: Greta Scacchi, Lambert Wilson and Leslie Caron headlining, supported by real opera singers or music hall, beautiful voice rich and deep. Everyone kept their roles brilliantly, Francesca Jackson standing out of the lot for her interpretation of air from the good (the Miller's son) that we probably all back on Broadway so her song was the perfect example of these voice and the dynamic signing the American musical.

The three headliners are, themselves, not professionals for the year. And answered with a blessing sometimes uneven. Leslie Caron has not always managed to slip into the role of Madame Armfeldt, even with a hole in his text. This is particularly unfortunate that this great lady, with her unique course, did not need that to stay in the firmament of great. His final still caught a lot and I would not tap this great lady who deserves my respect. Lambert Wilson it is much better out. It is very good actor, has a fine powerful baritone voice. He has already played the same work in London.

However, there is no opera singer and has suffered somewhat last night, comparison with Nicholas Garrett (excellent Carl-Magnus!) In the duet "It would have been wonderful." It has some limits in the early part, probably due to nerves. However, he camped a beautiful Fredrik, inhabiting the character and playing the man, nostalgic for his foolish youth gives way to the end to pick up the thread of his life and finally find happiness.

Greta Scacchi ... that mean? Madam, I do not want to offend you and if you're reading this, do not take my remarks as criticism, this is not one. Not sure sing! You do not have a lyric voice, and I do not know if you've just always sung yesterday. And yet, despite this very big handicap, you have camped a great Desiree. Your game, your interpretation was perfect for me. Desiree you were a woman in the twilight of his youth, who sees his illusions were shattered in the room, leaving her injured, lost, disillusioned but still saved, finding happiness with the man she loves without telling him (and without to say!) for so many years. Yes, it's true, you have not sung this beautifully fresh air that is "Send in the Clowns". But you just sang. You were playing fair. I do not know exactly how, but I like the idea that you're leaning on that weakness voice into a force to be a core on which you've built your interpretation. Ms. Scacchi, you were brilliant last night and I hope you feel how the audience (me at least!) Had been touched by your work. Because that's what I love, in the artistic work on stage.

This risk taking. This acceptance of his own limitations. The work of the artist who will rely on both the strengths but also its shortcomings to climb, perhaps with pain or fear, to a level of play that makes a room is just a game, but the fact that a song is just a piece of music but the cry of the heart. I always have great admiration for those artists who can rely on the humanity with what she has beauty and weakness to tell us the world and life. A Little Night Music is a great work, beautiful and fragile as a whisper that the slightest cry extinguish. Yesterday evening, however, the murmur has covered the clamor of our daily vanity to take us, a few hours in a happy and a little magical about the intersection of Mozart and Shakespeare. Thanks to the genius of Stephen Sondheim and smile so beautiful and human Greta Scacchi. Hats off to the artists!
Posted by Sara at 12:42

Whenever i see the post like your's i feel that there are still helpful people who share information for the help of others, it must be helpful for other's.