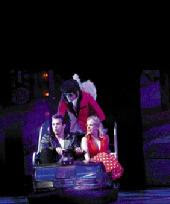 THE lights went down, the curtain raised and there were quiffs, red lipstick-coated pouts, polka dots and rock 'n' roll gyrating hips galore. In no time at all pensioners were up in the aisles doing the twist.
Yes, Dreamboats And Petticoats, the celebration of the smash hit albums of the same name, has finally made it to the Regent Theatre, Hanley.

Set in 1961 the story is simple, a flashback of adolescent romance with a mix of rock 'n' roll. Most of the action takes place at St Mungo's youth club, with Bobby (Josh Capper) and Norman (Jonathan Bremner) competing to win a national song writing competition and the hearts of female fans.

Written by Laurence Marks and Maurice Gran, the team behind Goodnight Sweetheart and Birds Of A Feather, the production has a comedic element that perfectly suits its audience. And quips such as "There's no point living beyond your means. If everybody did that the country would be bankrupt" can be appreciated by all in wake of the recession.


However, the plot is entirely predictable and the dialogue acts as a series of song cues. This production is definitely a celebration of music rather than a writing masterpiece, and the vibrant backdrop and energetic and vocally talented cast are what bring it to life as opposed to the script.

Dreamboats And Petticoats provides an easy, undemanding and fantastically upbeat night out at the theatre, and the music of Roy Orbison, The Shadows and Billy Fury among many others comes thick and fast in 43 classic numbers.

Those who were teenagers back in 1961 dominated the audience, and the unashamed singing and dancing in the stalls showed these songs are still clearly imprinted on their minds.

But it doesn't matter what age you are, Dreamboats And Petticoats is feel good nostalgia at its best. If you're not dancing in the aisles by the end, you'll no doubt be smiling along with those who are.

Dreamboats And Petticoats runs at the Regent Theatre until Saturday. 0844 871 7649 for details.

Claire Walker
Posted by Sara at 19:32