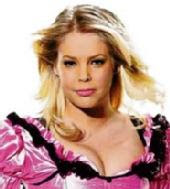 Hi guys, below is the interview featured in todays/yesterdays paper in Nottingham with Fran about Dreamboats and Petticoats that will hit Nottingham on Monday.

Why Dreamboat's Francesca still has the Oom-pah-pah

Busy girl: Highly talented Francesca Jackson.
IT was obvious from a few weeks into their respective competitions that Connie Fisher would play Maria in The Sound of Music and Lee Mead would be Joseph. Andrew Lloyd Webber's How Do You Solve A Problem shows turned out to be not that much of a problem after all.

We could have had a tall Nancy, a short Nancy, a young, innocent Nancy, a saucy nymph of a Nancy and even an Irish or Welsh Nancy.

We ended up with brash, ballsy Blackpool lass Jodie Prenger, whose run in the West End show continues to this day.

But, like the other 11 bonnet-flinging hussies, Francesca Jackson has emerged from the show's bursting-at-the-seams talent pool to prove they were anything but also-rans.

"I think we're all working now, apart from Keisha, who is studying at the moment," she says. "I suppose it goes to prove that making it through to that final round can only be a positive thing."

The Nancy contestants remain close friends and go and support each other's shows. They went en masse to see Jodie's opening night – "She was amazing!" said Francesca – and also her understudy, Sarah, who appeared on the show.

Despite the viewers' feelings that I'd Do Anything was an open contest, Francesca had a feeling Jodie might be odds-on favourite.

"Halfway through, I thought, 'Jodie's going to win it. She's got everything you'd expect in a Nancy'," she says.

Francesca, the fourth to be voted off, brands herself the "young, naive-looking Nancy".

That may have been true at the time but it's certainly anything but the case in her latest on-stage incarnation in Dreamboats and Petticoats, which arrives at Nottingham's Theatre Royal next week.

The show is based on the music of a 1950s compilation album which proved a surprise chart hit two years ago. It is scripted by Laurence Marks and Maurice Gran – the partnership behind TV comedies Goodnight Sweetheart and Birds of a Feather – and produced by Bill Kenwright. It has been running as a successful West End production since July.

"My character is the kind of ... what's the nice word for it?... the more tarty girl who wants to be the one everybody fancies," explains Francesca. "She dresses provocatively in little pencil skirts and busty tops. There's a lot of chest on display!"

The show contains around 40 songs from the '50s and '60s, including Great Pretender, Only Sixteen and Let's Twist Again.

Since Francesca's character is aptly named Sue and one of her love interests is called Bobby, it means there's plenty of name-dropping going on in the singing too.

Sue's rival for Bobby's affections is Teenager In Love, Laura. Eventually all the love tangles are resolved and the cast come together in the only original composition, Dreamboats and Petticoats (a Jason Donovan hit last year).

"Some of the songs are just sung in snippets but the audience love it," confirms Francesca. "When Laura sings Teenager In Love you can hardly hear her because the audience are singing along so loudly. It's brilliant."