Below is Abbie's review from Dreamboats and Petticoats, (although the picture is from CSWY last year.) 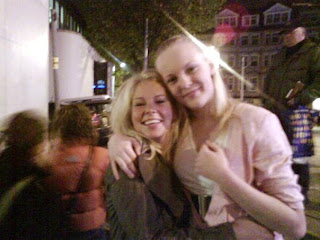 Set in 1961 the show tells the story of two young musicians Norman and Bobby who go on to compete in a national song writing competition and more importantly strive to seek the attention of the beautiful Sue! However, Bobby soon realises that the shy and reserved Laura is more than what she seems to be and that her passion for playing piano could help him to find love and rock and roll fame!

From the moment the curtains opened at the begining of Act one I instantly knew that this musical was going to be one I would never forget. The performers were full of energy and gave their all to make each character believable.

Francesca Jackson shone beautifully in her role as the gorgeous Sue. I was taken back by her performance of the song " You don't know" in Act 2 and the passion she put into the song was truly breath taking. Clare Ivory who played Donna did her role justice and her beautiful vocals certainly complimented Francesca's.

The supremley talented Lauren Hood stole the show in her role as Laura. Her outstanding vocals and ability to make her characters niaevety and timidness seem realistic made her stand out from the other members of the cast.

All in all this was an exceptional show which was well worth both the time and the money!
Posted by Sara at 14:00

Hey Sara great comments about Laura but her name is HOOD not Wood but as I've known her longer than you (I'm her dad !)I'll let you off. It's a great show'n'for a couple of hours makes you forget about all the crap thats going on outside.

Sorry, I read it spotted it then got distracted before posting it.
And I have to agree with Abbie she plays the role superbly, I can't wait to see the show again in November. Please pass on our congratulations and well wishes for the rest of the tour when you speak to her.
Sara