Congratulations To Jessie on Her Opening 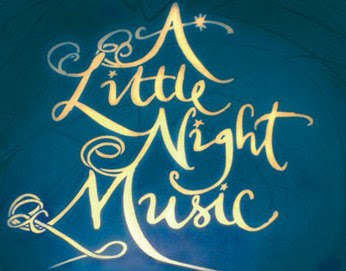 For Fan Reviews and Further reviews of A Little Night Music be sure to check out the Jessie Buckley Blog.

Like many a great romantic comedy before it, from A Midsummer Night's Dream to The Marriage of Figaro, the sexual entanglements in Stephen Sondheim's A Little Night Music work themselves out as the characters go out into the garden. And as the sun sets on Trevor Nunn's elegiac new production for the Menier Chocolate Factory, I for one couldn't resist being moved by the resolution of the plot when the six main characters finally pair off into the right couples and dance the 'Last Waltz'.

If some of Nunn's large-scale productions of musicals in recent years have seemed unfocussed, here he seems to revel in the intimacy of the Chocolate Factory. It's extraordinary to experience such a vocally demanding piece so close to the performers, who, incidentally, make a highly-calibre ensemble. There again, the spatial limitation of the venue is very much to the benefit of retaining the domesticity of the work, which could seem overblown and less intense in a large theatre. Here, Nunn makes intensity the motivation for everything that goes on in the show – mostly the sexual frustration felt by the main characters, none of whom can have the person best suited to them in the beginning, but the inner tension of the young man Henrik and the tension caused by the repression of the Countess by her husband are no less important.
Nunn responds musically to the piece, too, understanding the waltz as the key signifier in the musical working out of the plotline. Lynne Page's choreography comes into play here with as hypnotic a staging of the opening tableau as one could hope for, in which she's helped by Hartley T A Kemp's imaginative and utterly outstanding lighting design. Though the main set is sparse, consisting of semi-mirrored doors that open out in Act 2 to reveal the garden, David Farley's designs use props efficiently to make the transitions between scenes, and the period costumes are exquisite. Some of the walls open outwards to create new divisions, too, for instance for the Egerman house, and items such as trees, a chaise longue and a bed enhance the sense of place, but for me Kemp's lighting was the cornerstone of the visual element of the production.
It was considered controversial to cast Hannah Waddingham as Desirée Armfeldt, but Nunn explains in the programme that the decision stems from Bergman's film Smiles of a Summer Night, on which the musical is based and in which the actress Armfeldt 'sees her fortieth birthday on the horizon and realises that the time has come for her to take all important life decisions concerning the future of herself and her child'. The tradition of casting someone closer to 50 than 40 in the role is therefore not necessarily true to the text, and by bringing down the average age of the cast Nunn has added energy to the sexuality that infuses the story.
It really works. Waddingham is totally glamorous in the part, a blonde vision in a creamy dress, but anyone worrying that she's too young need not fear. This Desirée still has her eye on the passing years, but the emphasis here is on transition rather than arrival at middle age. The connection between Desirée and her lover, Fredrik, is white-hot from the very beginning, and it provides the line that runs through the show. Waddingham's achievement is in creating the artificial veneer of charm and then allowing the cracks in her composure to show. At this performance, tears streamed down her face during a touching rendition of 'Send in the Clowns': the words come to the fore rather than the voice, and it's deeply moving.

Opposite her, Alexander Hanson is an ideal Fredrik: masculine, with a wonderfully firm baritone and the ability to be emotionally expressive throughout. Alistair Robins is brilliantly buffoonish as the stupid Count Carl-Magnus Malcolm, again a fine singer, but it's Kelly Price who stands out, as his wife, Countess Charlotte. Price ensures that Charlotte comes to the fore as the instigator or controller of several subplots yet always leaves one with the knowledge that deep down she just wants her husband to notice her. Maureen Lipman gave a scene-stealing turn as Madame Armfeldt – I'd gladly see the show again just for her comic timing – and in spite of some strain during 'Later', Gabriel Vick generated just the right amount of intensity as Henrik. Making her professional debut as Anne, Jessie Buckley (who came second in the BBC's I'd Do Anything competition) shows her prowess as an actress and gives a mature performance that belies her years; however, I sense that the high-lying tessitura causes her problems in places.

Jeremy Finch is a serviceable Frid, enjoying the chance to sing a number that was cut from the Broadway production: 'Silly People', in which the servant observes the overcomplicated sexual behaviour of his masters (more interesting for the incisive lyric than the music). Kaisa Hammarlund is excellent as Petra, the confidante of Anne Egerman and lover to both Frid and Henrik, but for me her rendition of 'The Miller's Son' at this performance just stopped short of making the impact it could; Grace Link was the surprisingly confident child actor playing Fredrika Armfeldt at the show I saw. Excellent support comes from the large-voiced Mr Lindquist of Lynden Edwards and Nicola Sloane's sharply-characterised Mrs Segstrom, and the rest of the ensemble – John Addison, Charlotte Page, Laura Armstrong and Florence Andrews – are equally talented.

I had worried in advance about how successfully Jason Carr would be able to reduce the orchestration for just seven instruments (piano, harp, violin, cello, double bass, woodwind and bassoon), because it's usually a string-heavy show that is favoured by symphony orchestras. But in fact he's done a great job: the orchestral passages sound perfectly full, and most of the detail of the originals is still present. Just occasionally there was poor coordination between stage and band, but on the whole Caroline Humphris's tempi were well judged at this performance.
In short, there are no major weaknesses about the Menier's production of this perennially appealing show, which runs until March. Don't miss it.

By Dominic McHugh
Posted by Sara at 08:50

Email ThisBlogThis!Share to TwitterShare to FacebookShare to Pinterest
Labels: Other Blogs Plug

Thanks for posting this Sara -- I was there on Saturday, and (apart from a tree falling over) everything went perfectly. I'd thoroughly recommend this show to everyone and Jessie is superb.