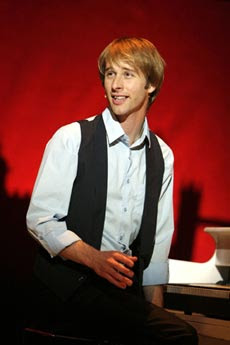 CHESNEY Hawkes has been out of the spotlight since his 1991 smash hit, The One and Only, writing and producing music and touring with his band, and this musical, featuring 27 of Barry Manilow’s songs, could be the big break he’s waited all this time for.

The plot involves five British lads who go to New York to audition and meet Jeff, a glitzy showbiz entrepreneur (a nice comic turn from Howard Samuels). Jeff’s very taken with Chesney Hawkes’ character, imaginatively named Tony Lowiman (geddit?) but he wants to send the rest of the band home. Following a weekend spent solo at Jeff’s home, Tony strikes up a relationship with Mandy, but waiting at home is his fiancée Lucy, who’s really in love with his best friend Scott.
All’s well in the end, of course, and there are frequent breaks for Barry Manilow’s polished, schmaltzy pop. The band and the vocals are excellent, although I was a little concerned that Hawkes’ voice might not hold up. Manilow’s range is considerable and Hawkes is nearing the end of the tour and it shows. If Bill Kenwright takes Can’t Smile Without You into the West End as planned, Hawkes is going to have to look after those vocal chords.

Even if you’re not a fan of Manilow, he’s written so many decent pop songs it’s hard not to like at least some of them.

Hawkes lacks the charisma required for a romantic lead, but he’s a likeable chap and he sings well.