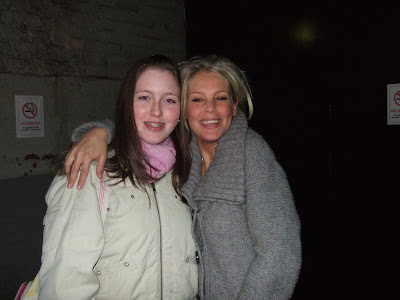 ‘Me, my mum and my nana arrived at the Palace Theatre at 1:30, an hour before the show, so after having a picture in front of one of the many posters outside and sitting in the bar we took to our seats and awaited the lifting of the curtains. I was sooooo nervous and I know this might sound silly but it was in case I didn’t get Fran’s autograph lol.

Anyway, the show started and I sat impatiently waiting for Fran to appear. Suddenly my mum started nudging me and pointing over at the left hand side of the stage and then I realised Fran was on stage but in disguise… I stifled a little scream. When Fran came on as Lucy, she blew me away with her singing, acting, everything! Her chemistry with ‘Scott’ was brilliant. She totally showed what she could do in this show, but I already knew that anyway! Her voice is so strong and captivating, I’m sure she looked at me during a song and smiled back at me, but I’ve a feeling she might not have been able to see anyway because of the lights, but I was only on the third row in the Stalls lol, who knows! Most of the time she was situated on the left on side of the stage (as you look at it), right in front of where I was! The show had its equal balance of seriousness and humour, an example of which would be ‘Copacabana’ which had the whole audience in stitches, including me; one of the only teenagers in the audience, if not the only one. I love Fran’s outfit/costume in Copacabana, it brings back memories of ‘I’d Do Anything’ and I’m so glad she took part!

This review would not be full without a mention of Howard Samuels; he is amazingly funny and makes the part of Jeff his own, just like the rest of the cast, though especially during Copacabana. Also, Siobhan Dillon is amazing, her singing and acting are brilliant and the rest of the cast and ensemble work really well together and are also brilliant, the show would not be complete without them! Humour was also added by reference to certain song titles and the ‘bus’ scene which was hilarious! Now, I have to admit to not being a huge fan of Barry Manilow, having only been to see the musical because of Fran, but those journeys home from school on the bus listening to his music persuaded my mind that he is actually quite good. ‘Can’t Smile Without You’ obviously played a bigger part in twisting me to like his music, sung by amazing singers and actors/actresses in the show!

The audience participated a lot throughout, many of them being avid Chesney fans and this added to the enjoyment of the evening. After two standing ovations, it finished L.

We made our way to the stage door and waited. Chesney came out first, I asked for a picture and an autograph- blue pen on the blue front cover of the programme… Then Edward came out (plays Scott) and I had a picture with him. After about 20 minutes Fran came out and I didn’t realise at first. I screamed and she said hello, quite shocked at my reaction I think. I asked if for a picture with her and she did, she is so nice! I actually had a full conversation with her, she signed my programme in my other black pen on the page with her ‘credits’ included it reads, “To Emily, Millions of love Francesca Jackson xxxxx”!!! It’s going to go in a frame alongside my Lee Mead autograph, who cropped into the conversation and Fran agreed he is good-looking! We talked about various things, singing lessons, auditions and Can’t Smile Without You, but we let her go so she could presumably have her tea before the next show at half 7, the last show in Manchester. She wished me good luck with my future (hopefully musical theatre) and we wished her good luck and said we would look out for her in the future!

She is so pretty and amazing and such a genuine person! I mean, she didn’t have to stay and talk or say good luck to me but she did. Because she’s phenomenal and I will always remember it!

Many thanks to Emily for the great review and lovely picture.

great review, and I totally agree with everything you've said!!

Another FAB Fran review , thanks for sharing :)