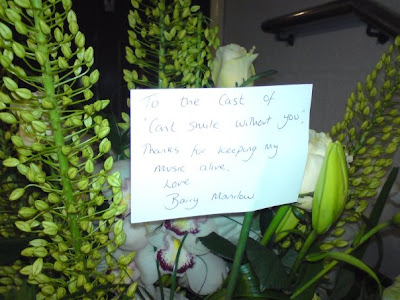 Can't Smile Without You

The reason? The combination of Bill Kenwright and an idea he had to produce a musical show featuring the music of Barry Manilow. It was always going to be good, and the delayed start on this opening night simply added to the charged atmosphere.

I had, prior to this, never heard of Chesney Hawkes. With a name like that, he should be in old tyme music hall, I thought. When I saw him, he didn't resemble star quality - more like the young fellah who fixed my computer a few weeks ago from PC World...

But what an inspired bit of casting. He actually sounds like Manilow on a lot of the songs and I really was quite impressed. He plays Tony, leader of a band who goes off to NY to take part - or they at least think they will take part - in a musical reality TV show. But they arrive too late, somehow manage to impress Jeff at the studio, but Jeff only wants solo singers, Tony of course. Jeff is played by Howard Samuels who gives better support than the Dartford Bridge. Wonderful stuff.

The music of Manilow flows through this show like gold plasma....I can't think of any song of his omitted. It's a Miracle, I Don't Want To Walk Without You, Could it Be Magic, Somewhere in the Night...they're all here.

Due to the delayed start, a certain Bill Kenwright addressed the audience and said Manilow's music had got him through so much "emotional stuff". True for a lot of us, I'm sure. Trouble is, hearing all these amazing songs just brings it all back. Mandy, Let's Hang On, Weekend in New England, (by this time I was blowing my nose) Looks Like We Made It, Tryin' to Get the Feeling Again, I Write the Songs.

Ok, so there were lots of arm waving BM fans not interested in the story line but it's strong enough and as a bonus has two of the most gorgeous and capable ladies you could possibly imagine - lets start with Mandy. Siobhan Dillon from How Do You Solve a Problem Like Maria? and more recently, her West End debut in Grease, plays Tony's true love. She is sensational. Wonderful voice amongst other things...! But she is pipped - just - by her rival in love, Francesca Jackson as Lucy. Francesca plays Tony's fiancee' but she doesn't really love him and instead falls for Scott, Tony's best mate, played by Edward Handoll.

Francesca was an unlucky finalist recently in BBC's I'd Do Anything - and to think I voted for Jessie..!! She just stood out for me with her confident poise and smashing voice.

When tragedy strikes, Tony loses his memory and can't even remember who Lucy is (idiot)! let alone the mysterious Mandy from across the pond. But slowly Tony starts to remember and piece things together. By this time Manilow mania has us twisted into the story like a snake around it's prey. We have Copacabana, the very apt Ready to Take a Chance Again, This One's For You, Who Needs To Dream (this is such a good song) and of course, Can't Smile Without You, whose lyric writer was in the audience, too.

As I said, this was the opening night of this Churchill Bromley Production but it will be some time before it plays for the final time. Yes, there were one or two minor technical hitches but come Press Night and the tour ahead, this company will be buzzing like a swarm of bees, producing sweet honey wherever they go.

As for Chesney, apparently a one hit wonder from 17 years ago, I want to know where he's been hiding himself. He's no Laurence Olivier but he has a voice to die for and a clean cut personality that is refreshing enough to suggest more musical theatre if he so wishes.

At the end of the show, a massive bouquet was brought onto the stage and a message was read out from the sender - "Thank you for keeping my music alive, Love, Barry Manilow. Neither Manilow or Kenwright need to worry - best not put that "House Full" sign back in store just yet.

Reviews by Geoffrey Billingsley for Theatreworld Internet Magazine
Posted by Sara at 16:00