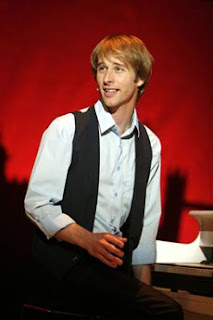 Can't Smile Without You

Published Monday 8 September 2008 at 13:25 by James Green
Billed as the Barry Manilow musical, this is a Mamma Mia!-type show lacking Manilow and his life story, but jam-packed with all the veteran pop star’s hits. To be exact - 27 of them. I Write The Songs indeed.

Chesney Hawkes as Tony in Can't Smile Without You Photo: Keith Pattison
So it’s a must for Manilow’s fans and an entertaining night for others. More than that, if, as hoped, it transfers into the West End, it is an assured career boost for Chesney Hawkes who with The One And Only (no pun intended) has appeared something of a one hit wonder.
The story concerns a five-piece band from London arriving at a New York audition seeking fame, a contract and fortune. Hawkes as Tony is the lead singer about to marry Lucy, but having his doubts. She is played by Francesca Jackson, owner of a really belting voice, who also wants out as she has fallen for Scott, the band’s No 2. That’s Edward Handell, another powerful singer who has played Buddy Holly.
Blonde No 2 is Siobhan Dillon, a New York PR named Mandy, of course, who is romantically drawn towards Tony. On her stiletto heels, she has the figure and face to win any man, and a voice that carried her into the final week of BBC1’s How Do You Solve a Problem Like Maria? contest, plus a Lloyd Webber record contract.
With plenty of songs and complications along the way, the framework is there for a switch of love partners. Cue for It’s A Miracle.
While the quartet are sorting themselves out, Howard Samuels as a cheapskate American showbiz manager/agent/whatever-pays-the dollar windbag is putting on a show-stealing performance. Whether singing, dancing, or dispensing one-liners, he is a natural joy - a rogue with an eye for the main chance and a percentage.
In keeping with an essentially musical production, there is a first class band, nine strong at times, under the command of keyboard player John Maher.
It helps that Chesney Hawkes, Manilow-style and looking not unlike him, can sing to his own piano accompaniment. With as many script lines as lyrics, he is making demands on his vocal chords. But with a break like this hopefully his voice will hold out.
Production information
By: book by Tim Prager
Management: Bill Kenwright and Churchill Bromley
Cast: Chesney Hawkes, Siobhan Dillon, Francesca Jackson
Director: Keith Strachan and Bill Kenwright
Design: Andy Walmsley
Lighting: Ben Cracknell
Choreography: Carole Todd
Musical direction: John Maher
Production information can change over the run of the show.
Run sheet
Churchill Bromley August 28-September 6
Orchard Dartford September 8-13
Empire Liverpool September 15-20
Hippodrome Bristol September 22-27
Palace Manchester September 29-October 4
New Hull October 6-11
King's Glasgow October 13-18
Festival Edinburgh October 20-25
Theatre Royal Nottingham November 3- 8
Derngate, Royal & Derngate Northampton November 10-15
Regent Stoke-On-Trent November 17-22
Civic Darlington November 24-29
Posted by Sara at 08:45