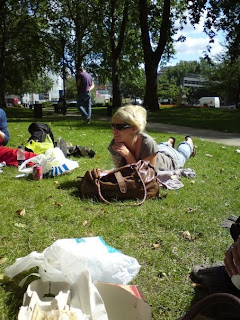 After World Premier and first 10 days of the national UK tour of The Barry Manilow musical of Can't Smile Without You in Bromley, decided it was time we heard from Fran again as to how things were going so far and what her expectations were in respect of the rest of the tour.
Hows the first week of the tour been?
Fran: It’s been exhausting! We’ve been rehearsing every day since we opened, but great fun at the same time!! The audiences in Bromley have been fab as well!
What's it like working with the rest of the cast?
Fran: It’s brilliant! Everyone is so lovely! It’s also a very small cast, which makes it really easy for everyone to get to know each other really well! They’re great!
What do you expect from the rest of the tour?
Fran: To carry on having loads of fun and hope the audiences stay as enthusiastic as they have been in Bromley!
You mentioned previously that It's been an ambition of yours to create a role in an original cast has this opportunity been everything you dreamed it would be?
Fran: Yes it's great! It’s just really rewarding to be able to create something from scratch!
Any promotional interviews for the rest of the tour lined up - not really seen any reviews or promotion about?
Fran:  I’m not sure actually! I think our main press night is Liverpool but we will get reviewed by local papers in each venue! I think I’m doing an interview with Swansea Bay radio while we're at Bristol.
Have you seen or spoken to many of the other Nancy or Oliver contestants since the show - have any of them been or got plans to come and see you?
Fran: I speak with Samantha all the time; She’s a really great friend!! And we're both trying to watch each other’s matinees when we're close enough to do so on tour!
And Amy came to watch the show this week, which was such a lovely surprise!! She’s having an amazing time on The Sound of Music! It was so so lovely to catch up with her!
Have there been any funny incidents on or off stage so far that you can tell us about?
Fran: Well I think the funniest moments on stage for me are when we have loads of Chesney fans in and I get booed for cheating on Tony ( Chesney ) I find it very hard not to corpse at these moments!
How much are you enjoying being back on stage?
Fran: More than ever!! I'm just so so grateful and lucky to be working and to adore every minute of my job!
Whats your favourite song from the show and why?
Fran:Ooo, well favorite Barry Manilow song is Weekend in New England and Chesney sings it so beautifully! But in the show I just love singing my duet with Siobhan (Old Songs/If I Should Love Again), it's just a really lovely arrangement of the two songs!
When the tour hits Bristol will you still be doing the Saturday night show as your performing in Cardiff on Sunday night in the Three Phantoms Concert?
Fran: Yes absolutely!!!
Can you give us a hint as to what you might be performing in Cardiff?

Fran: To be honest nothings been confirmed yet but I will let you know as soon as I know

Are you involved at all in ALW 60th Birthday concert?

When you’re not working or on a day off what do you like to do to relax?
Fran: Watch all my recorded episodes of Coronation Street, Eastenders and the Simpsons!
I'd like to take this opportunity to thank Fran for her time in answering these questions and wish her all the best for the rest of the tour and hope we hear further updates as and when she has the time, as the rest of the tour schedule looks incredibly busy.
Posted by Sara at 18:00

Thanks for this, and thanks to Fran for giving the time to do this for her fans. I'm so glad she's doing the Saturday night at Bristol - I almost had a heart attack when I realised she might not! I can't wait till the 27th!!!

Lovely interview!! A huge thank you to Fran for taking the time to do the interview for us!
I am so pleased she is enjoying the tour and will try and come and see her in one of the shows as soon as I can! xxxx