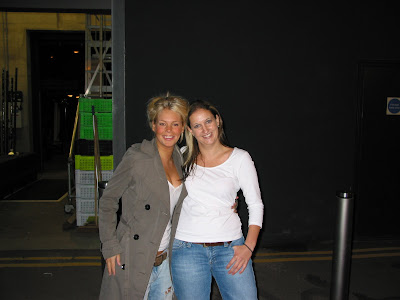 Well I decided that it wouldn't be right to go through the first week of Frans new tour without a Fan review which found me dragging myself on a 3 hr Journey to Coventry on Friday for you all..... Well that's the excuse I intend to use anyway.

For those of you who don't know what the show is about in very broad terms so as not to give anything away; Old Bobby telling his granddaughter about his youth and the story of Girl Loves Boy who thinks He loves another Girl who in fact loves someone else, you can imagine the many places this story is sure to go.....Set in a Youth club with its own band, a day trip to Southend and a song writing competition.

I arrived in Coventry around 6:15 and following a little wonder to stretch the legs went into the theatre to grab a cup of coffee as not knowing the area and not wanting to get lost......

As I made my way to the only empty table who should I spy in the corner but Fran, who wasted no time in coming over to say hello.

Fran proceeded to tell me how much of a week it had been, the show had only been fully cast a fortnight beforehand, the main characters not being cast until then were the leading men, making rehearsals difficult, this resulted in only 6 days of full rehearsals and the Opening Night on Monday was also there dress rehearsal things had been that tight. They were unaware they were being reviewed on Monday and frankly by the sound of things it had been so hectic they wouldn't have needed the added pressure of knowing. It also makes the review in the Coventry Telegraph more glowing when you take these circumstances into account.

Fran and I then arranged to meet after the show and she went off to get ready. The audience had a right mix of ages and I believe the show really appealed to everyone there.

The show starts and the energy starts, the cast all incredibly talented were full of energy there are some great songs and some great performances Fran as always shines brightly and the difference with this production is that most of the cast are on stage throughout the show whether they are actively involved in the current piece going on or there in the background.

Fran of course is playing Sue the youth clubs "top tottie" I suppose is the only way to describe her character its a great piece really over the top and Fran plays it to perfection as you would expect her to. Her real shining glory number is deep in the second act with "You Don't Know" which I would be surprised if you don't get shivers listening to.

The whole show is up beat and you get to see Fran doing a lot of 'dancing' in this role, of course this is in tune with the whole setting of the show and the dance routines I believe are true to the period but I can not guarantee this for you.

Norman played by Ex-X-factor contestant Jonathan Bremner with his bold as brass everybody loves me act banters well with Fran and the two pull of a very convincing act as a pair.

Then there's Laura played by Lauren Hood who's character is as quiet as Frans Sue is bold, is beautifully played with some wonderful vocals.

Well before the end of the show the audience are all up dancing and clapping there way through the last 2 songs.

Although Fran doesn't have many solos in the show there are a lot of great company numbers which allow her to show of her powerful voice.

Whilst there I was speaking to other members of the audience, well you have to when your on your own, and everyone asked me to pass on there thanks for a wonderful show, however the best compliment for Fran which I had delight in passing on was from someone who had seen the production with the previous cast already but felt that the Sue in this production was much better, and this comment was made before the person knew I knew Fran.

After the show I went out to see Fran and pass on mine and many other members of the audiences congratulations on the show it was well worth the long trip. I asked her which show she preferred and before I even had the question out my mouth she was telling me it was this one she said "......it's such a fun role to play as it's just so out there.....".

All that was left now was the 3 hour journey home.

Anyway I hope that hasn't bored you or put you off going to see the show. I'm sure that as the tour goes on the show will continue to gain momentum and can only get better as the cast settle further into their roles.

A final note - trying to get reviews or at least pictures from the whole tour however with the locations and where my sources are bassed this is proving more tricky than I anticipated, locations covered so far are Belfast, Stoke, Bromley and possibly Nottingham anyone going to see the show please let us have your thoughts and copies of any pictures whether its at the lease locations or more especially at any of the other locations.

Great review Sara -- I'm really looking forward to seeing the show in Belfast next week and particularly pleased to hear that Fran features heavily. Glad you got to meet up with her as well (twice). Nice one!

Thanks David, sure you'll enjoy it, looking forward to hearing what you think.