Dreamboats and Petticoats takes Belfast back to the swinging sixties

COME on everybody! Belfast went back to the swinging sixties last night (Monday) as Dreamboats and Petticoats began its run in the Grand Opera House.
Going back to the golden era of music, when British teens were influenced by the Rock 'n' Roll produced by Elvis Presley, Roy Orbison and Buddy Holly and when Billy Fury was sending people Halfway to Paradise, Dreamboats and Petticoats combines music and comedy to produce one of the best shows around. 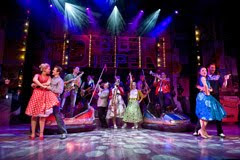 The cast of Dreamboats and Petticoats take the audience back to the swinging sixties at the Grand Opera House.


Filled with hit after hit played and sung live on stage, which had the audience singing and clapping along, Dreamboats and Petticoats was full of genuinely laugh-out-loud moments and the sweetness of youth when being in a 'group' and falling in love were all that mattered.

Beginning in a dusty attic, we find an older Bobby (Peter Gerald) and his granddaughter going through long forgotten belongings, when Bobby finds his precious Fender electric guitar and we learn of his fifteen minutes of fame when he was the lead singer in a group.

Stepping back into 1961, we see a younger Bobby (Josh Capper) belting out Let's Dance as he auditions at St. Mungo's Church of England Youth Club for a place in the group. His fifteen minutes of fame are soon over however, when he is quickly upstaged by the older, brasher Norman (Jonathan Bremner) who takes over the group, quickly renamed Norman and the Conquests, with his performance of The Wanderer.

Bobby and Norman are soon competing again, however, as Norman sets his sights on Sue (Francesca Jackson), the girl of Bobby's dreams. And when a songwriting competition is announced Bobby teams up with Laura (Lauren Hood), the little sister of his best friend Ray (Wayne Smith), to win the dream prize and capture Sue's heart.

However, his plan quickly changes as he develops feelings for Laura along the way, and young Bobby agonises over just how to tell Laura he loves her.

Written by Marks and Gran, the team behind Goodnight Sweetheart and Birds Of A Feather, plenty of laughs were guaranteed, and Josh Capper, who graduated from Liverpool Theatre School in 2006 receiving the award for Most Promising Graduate, delivered not only a stunning vocal performance but he showed a fine acting talent, shining as the likeable Bobby.

Each member of the talented cast delivered fantastic performances, with Lauren Hood (Carousel), Wayne Smith (Grease is the Word), Francesca Jackson (I'd Do Anything), Jonathan Bremner (X Factor) and the members of the Conquests, many of whom starred in the Buddy Holly Story, delivering wonderful vocal performances and showing their superb musical ability.

With hits such as Bobby's Girl, Runaway, It's Only Make Believe, Do You Wanna Dance?, Dream Lover, Only The Lonely, Happy Birthday Sweet Sixteen and Dreamboats and Petticoats, written by Jason Donovan, Dreamboats and Petticoats is a show not to be missed. Feel-good and toe-tapping, it is perfect for the whole family and you'll come out of the theatre wanting to sing and dance the night away.

Dreamboats and Petticoats continues at the Grand Opera House until Saturday (October 3). For further information please visit www.goh.co.uk.
Posted by Sara at 18:00