Whats It Like Working With Fran? Well We Asked the Question... 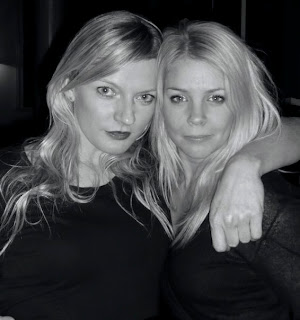 Here at Frans Blog we aim to go further to bring you more information on the very talented Fran Jackson and we have been very lucky to have received the following exclusive piece from Fran's friend and fellow performer CJ Johnson. Fran and CJ worked together in Rent Remixed on the West End in 2007/08.

I would like to take this opportunity to thank CJ for her time in writing this piece and providing another great picture for the site.

I've been asked to say a few words about Fran. But I'm sure it'll turn into a novel! Fran and I had no choice but to become close friends very quickly, as I was rehearsing Maureen (her girlfriend) for the first 2 weeks of rehearsals. Had I a choice.....! But seriously though, I felt such a deep bond with Fran in those few weeks that it was very difficult to hand her over to Denise (Van Outen)! I had to refer back to Stanislavsky to decipher whether it was mine or 'Maureen's' jealousy appearing every time they held hands! Ha ha. Really, she gave me so much in the rehearsal process. In terms of her commitment to the growth of both our characters and their complex relationship and as a warm, beautiful friend.

Fran's one of those people who makes you feel wonderful about yourself. She gives you her undivided attention, and as long as you're with her, you're the centre of her world! And that's why I would happily spend every single matinee day over the road in 'Med Kitchen' with her and Rhoe (Oliver) Thornton. In the safety that as long as we're there, discussing who made who laugh in the show that day over Fran's 'burger with no bun' and "three hot waters with a slice of lemon', then we're the funniest and most talented people in the world! Ha ha! She is ridiculously self-effacing when it comes to her own talents and achievements. She is so very true to herself. All cliches aside, she's genuinely a beautiful, dedicated and giving actress and such a refreshingly, powerfully unique voice. I love that about her. I also love her 'woolly grey' wardrobe, her pink steamer attached to her face and her belief that lemon bon-bons are 'good for the voice'. She will go from strength to strength and deserves this wonderful support from all her lovely fans.

Keep checking back for more news and updates on the incredibly talented Fran Jackson, including a fan review on Can't Smile Without You at the end of the month and much more.

Wow! Sara, you're doing such an amazing job of this blog! CJ Johnson is AMAZING. And what she wrote is so sweet! Love it!

OMG, thats soo lovely! I have tears in my eyes lol!!
aww i love it :)
xxxxxx

Lovely article and that picture of Fran And CJ is amazing! Their both gorgeous!