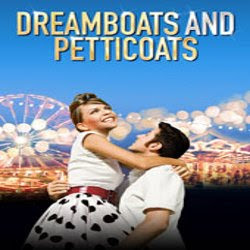 Fran has confirmed that she has accepted a new touring role. As of tomorrow She starts work on preparing for the role of Sue in the No1 UK Autumn tour of Dreamboats And Petticoats.
The tour kicks of in Coventry on 14th September, and runs until 5th December.

THE GREATEST DAYS OF YOUR LIFE!

Written by Laurence Marks and Maurice Gran, the team behind Goodnight Sweetheart, Birds of a Feather, The New Statesmen and Shine On Harvey Moon, this new feel-good musical production will give you 'the greatest time of your life', taking you back to a time when each passing week brought another classic track.

In 1961 emotions run high as young musicians Norman and Bobby compete to win a national song writing competition – and, more importantly, the attention of the gorgeous Sue! But when Bobby discovers that shy Laura is no slouch on the piano, love and rock 'n' roll fame beckons...

Featuring classic tracks from Roy Orbison, The Shadows, Eddie Cochran, Billy Fury, and many more, including Let's Dance, To Know Him Is To Love Him, Shaking All Over, Bobby's Girl, Three Steps To Heaven, Little Town Flirt, Only Sixteen, Runaround Sue, Happy Birthday Sweet 16, Let It Be Me, Great Pretender, C'mon Everybody, Let's Twist Again and many more hits from music's golden era!

Check out the link below for further tour details, pictures from West End and booking tickets.
Dreamboats & Petticoats Official Site
Remember anyone going to see this reviews and fan pics always wanted.
Posted by Sara at 10:44

Email ThisBlogThis!Share to TwitterShare to FacebookShare to Pinterest
Labels: Updates

I'm already booked for Belfast in September! Nice one Fran!